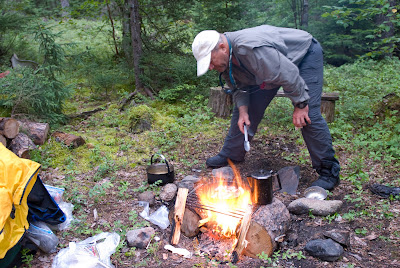 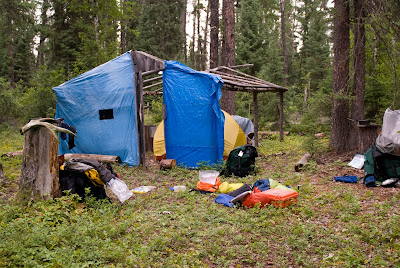 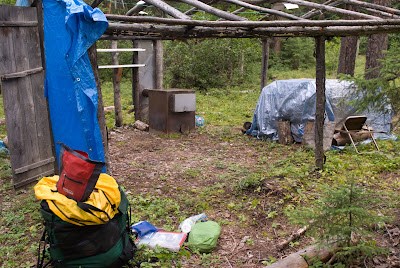 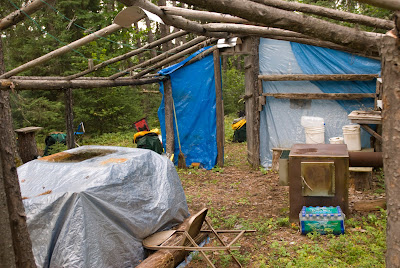 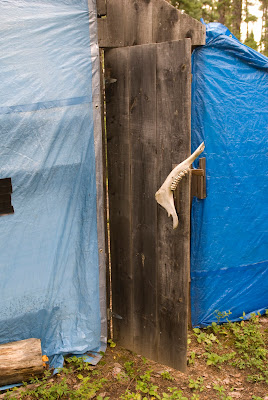 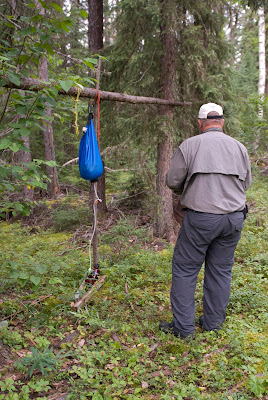 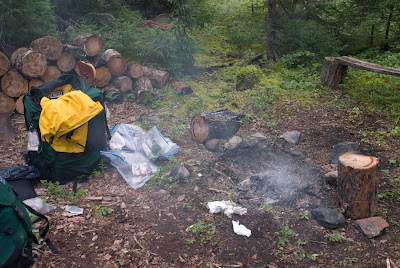 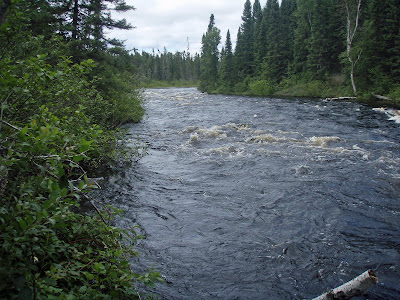 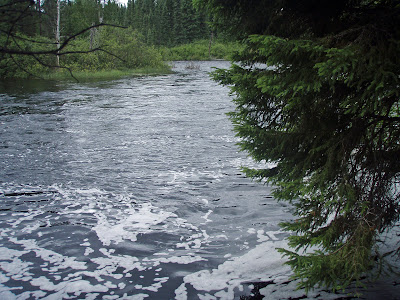 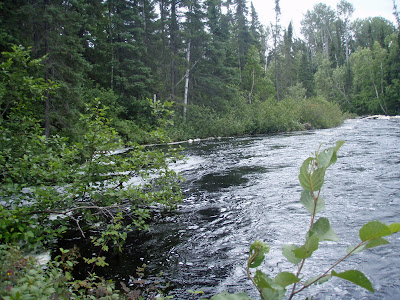 By the time we got on the water it was 09:33 am. We needed to haul everything back down to the water down the 50 meter trail.

Today we needed to get around Iron Falls. We knew there was a portage on river left at the top of the falls. Now with the higher water level the class 1 rapids would probably be pushing 3.

In Ron Reid and Janet Grand’s book, Canoeing Ontario’s Rivers, they mentioned that the portage was on river right that cut across the bend. The book was written in 1985 so it’s anyones guess it the portage would still exist. The book goes further and said there was a campsite at the falls. The Canoe Atlas of the Little North shows a 700 meter on river right. Again, that could be very old information. Jonathan Berger and Thomas Terry probably got the information from Reid and Grand.

We approached the general area of Iron Falls at 11:30 am. We rounded a bend and in front of us was some recent flagging on river right. (UTM # 16) The river then made another bend to the left with some rapids and very large standing waves up to three feet high. Past this section the river made another bend to the right to the top of Iron Falls, then it drops through a series of chutes. As someone put it, if you miss the portage on river left , you die!

I haven’t taken the time so far to described our paddling set-up. We are paddling a Souris River Quetico 18.5 foot canoe. We have five packs that contained 21 days of food (and we eat well). I’m in the stern and I weight about 155 pounds. Dave is in the bow and although I don’t know how much he weights, but he has maybe 100 pounds on me. What I’m saying is that we are bow down and we don’t have much freeboard. We need to be careful what we run.

Could we be that lucky that someone recently flagged the portage on river right. We wouldn’t need to risk running the fast water with the rapids and the standing waves before the falls. 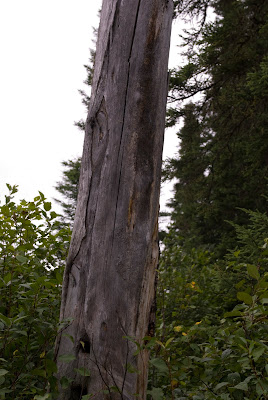 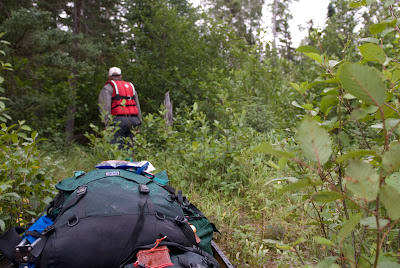 We decided to walk back toward the canoe then walk the shore line on river right to the east. I came across some more flagging but nothing that looked like an old portage or temporary trail that someone would carry a canoe across.

We had no other choice but to get through the large standing waves. The largest waves were right down the middle. We didn’t want to be there. Running the right side was out of the question even if we made it past this stretch because of the fast water just before the falls. We wouldn’t be able to stop.

The only way was river left and that had it’s own set problems. This inside corner on river left had fast water rushing pass it pushing the current to the center of the river where the large standing waves were and where we would surely swamp the canoe.

This was explained a couple times. We got in the canoe and paddled upstream to an area where we needed to set up before running it.There wasn’t any more time to discuss this as the current pushed us forward. I picked a line on river left and we hit it but we were pushed closer toward the center of the river into the 3 foot waves. We took on a lot of water and I yelled for Dave to keep paddling to the shore on river left.

While standing in the water on river left we took the packs out and emptied the canoe. Well, one more section to go, but from here these waves looked even bigger.

Another game plan was discussed. We didn’t do any better this time, in fact, we completely swamped the canoe. It was a very strange feeling watching Dave slowing sinking out of sight and the packs were now floating in the water, but still strapped to the canoe. I felt the cold water rising on my chest, then the next thing I knew I was floating down stream away from the canoe. There was a brief sense of panic when I saw that I floating away from the canoe, but I knew I needed to swim out of the current toward the canoe. I couldn’t see Dave from my position. When I swam over to the canoe I grabbed the painter line at the stern. That’s when I saw Dave swimming with the front painter in his hand.

Once again, we made it back to shore. We unstrapped the packs and got them on shore. Again, all of this while we were standing in the water. We emptied the canoe and pointed the bow downstream before putting the packs inside.

While standing in the water we got back into the canoe, then we looked for the portage downstream. We saw an area that we thought might be the opening. We made it to the area and quickly got out. Once on land we found we we about 10 meter from it. There was a tree blocking the actual landing, so we just lined the canoe over to the correct spot. (UTM # 17)

After we got all the gear out of the canoe I saw that I had water inside my map case. I knew at one time this case was waterproof.

The portage was 110 meters long and well used over the years. When I went to grab my little yellow notebook in the plastic bag to marked the portage distance I notice that it was gone. Well, I’m glad it went down Iron Falls and not me. 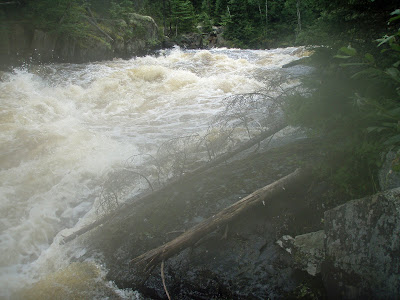 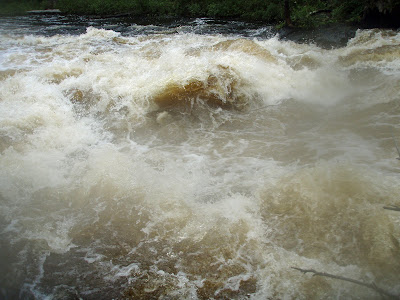 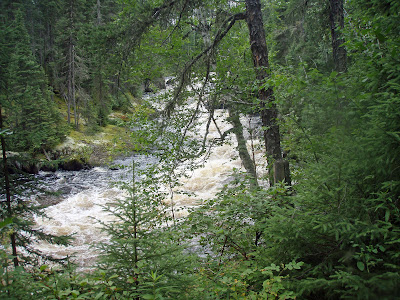 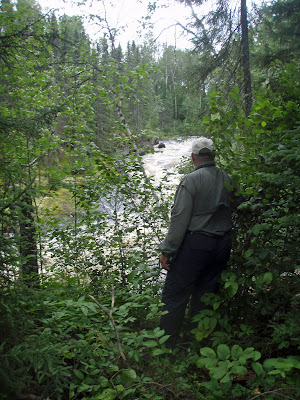 Our next big obstacle was at the put in. (UTM # 18) The water was over the rock where a person would normally launch the canoe. Dave put the canoe into the water while I held onto it keeping it from banging the rock as it bounced up and down. The water was rushing pass too fast and waves were bouncing the canoe where it needed to be to sit in it. The waves were also bouncing back from the left bank a couple feet away. Once all our gear was inside Dave got in the water right next to shore and I followed with the stern of the canoe. Once the canoe was far enough downstream while standing in 3 to 4 foot of water we got inside and took off. It seemed we were in the area of the falls forever. 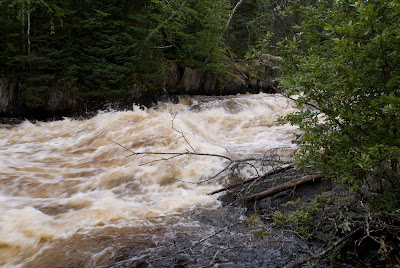 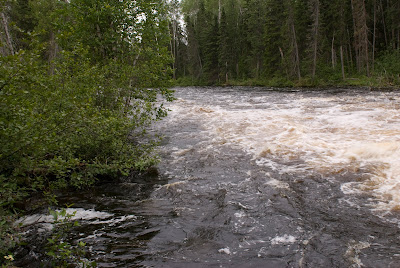 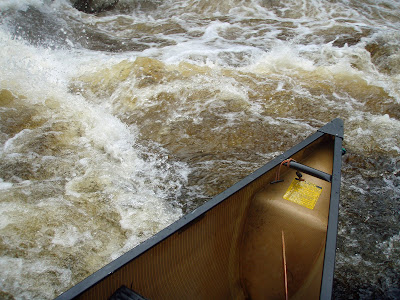 Dave had information that there was a “good” campsite 14 km downstream of Iron Falls.

We kept our eye out for any sign of any campsite as we paddled. The first big opening in the river after Iron Falls we came across a Geologist camp with two cabins. (UTM # 19). We saw a satellite dish on the point before seeing the first cabin. That explained all the flagging we have been seeing in the bush. We pulled in and took a look around. I got some photos of some of the core samples that were in large trays outside. It wasn’t until we were back on the water when we saw the second cabin. 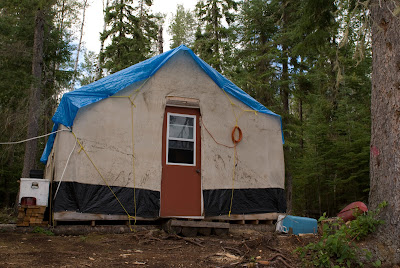 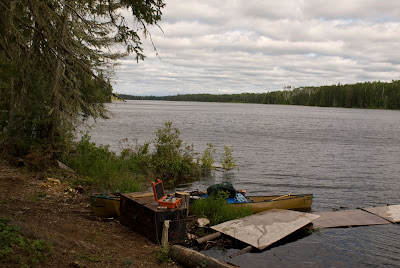 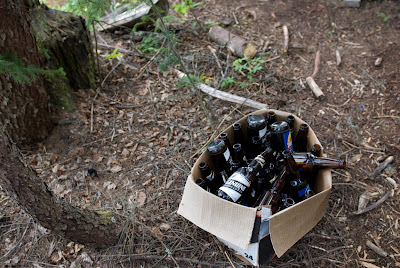 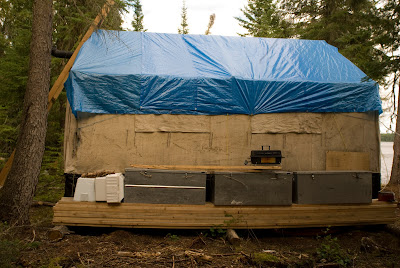 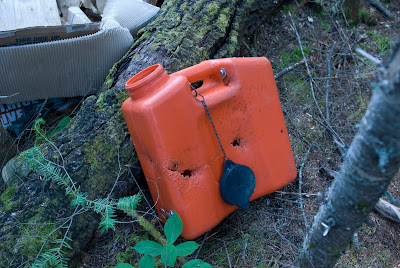 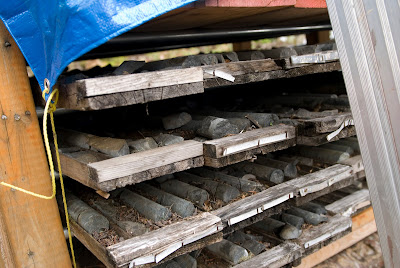 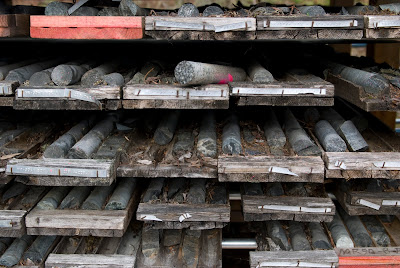 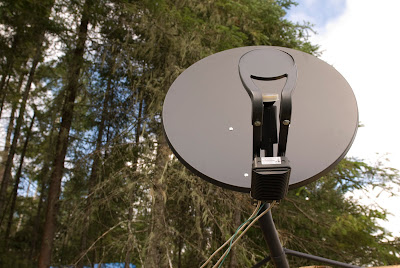 We continued on our way to the NE. Then I noticed my compass reading moving N, then NW, then W, then SW, then finally back to NE. There must have been a large mineral deposit nearby. I guess that would explain why the prospectors cabins were here and all the flagging in the bush. We also saw a survey monument somewhere in our travels.

It was getting later in the day and it was obvious that we passed the “good” campsite that Dave had information on. We kept looking at our topo maps for some higher ground where there might be the possibility of a campsite or where we could make one. It sure didn’t look good.

We finally were running out of time to find a site. Dave got out of the canoe several times looking for anywhere to throw a couple tents. Finally at 08:08 pm we bushwhacked two tent sites up in a blow down area. (UTM # 20) We cooked dinner using my Peak One Stove after clearing areas for our tents. Another night of not writing in my journal. I lost information from the last 5 days when I lost my yellow notebook earlier today. I was finally able to make this entry on 08-23-09.