Didn’t sleep well last night. There were more metal cans underneath the moss where I pitched my tent. Last night I was going to work around the one I felt while I was writing in my journal. I moved the sleeping pad over and I found some more.

Then I realized I had a leak in my pad. I blew air into the pad a couple times during the night.

This morning I repaired two holes and then realized I had another one that I missed. I had already threw out the hot water to heat the glue so I’ll have to repair it this evening.

The temperature was moderate and not as cold as our last bushwhacked site along the Petawa Creek.

This morning there was dew on everything. This campsite faces to the SE so when the sun got above the trees it quickly began to warm up. There is a thin layer of clouds between us and the sun. Maybe the weather pattern has changed for the better.

Dave is making eggs and potatoes for breakfast.

I looked at my watched this morning at 06:20 am. About five minutes later I began packing up my sleeping bag and pillow.

I got out of the tent and gathered some wood for a fire. Once I got the fire going I put on the coffee and some water to heat the glue.

The sun is now shining!

We were just about ready to put the canoe in the water when Dave decided he wanted to put the rest of the epoxy he brought on the bow and stern. Dave was traveling before our trip and didn’t have time to put some external skid plates on the canoe. While the two part epoxy was setting up I listened to the wind blowing through the trees wondering how it would affect us today. 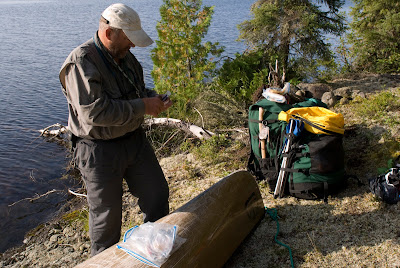 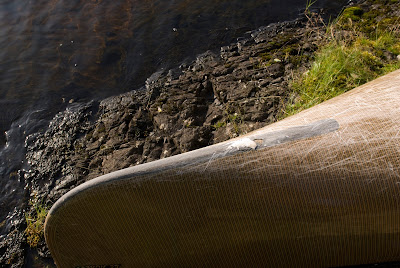 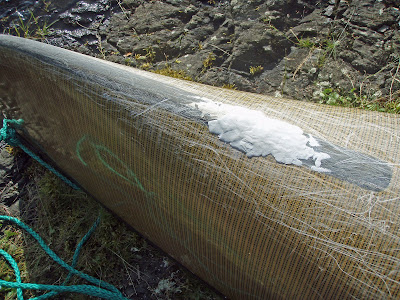 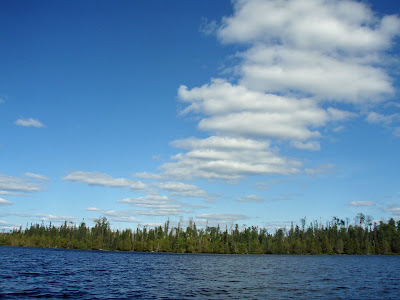 The epoxy is set and we’re off at 10:01 am. Just prior to leaving we saw Don Elliott’s Otter fly by. It circled and landed over at his outpost out of sight of our campsite. He picked up the guys who were staying there. He must not have dropped anyone off because he was only on the water for about ten minutes before taking off again.

We were at the portage from Auger to Quartz at 10:14 am. Quartz Lake is the name on Don Elliott’s maps. The portage is near a red triangle that’s located in the western area of the little bay. The take-out is UTM #46. The put-in at Quartz Lake is UTM #47. The length of the portage was 566 meters long. It’s a good portage compared to most of the ones we’ve been on. It was wet and muddy the last 150 meters. The ground water is sure cold on the feet. Don Elliott does keep the portage trail pretty well cleared since he has a boat cached on Quartz Lake. Although there were some trees over the portage when we crossed it. 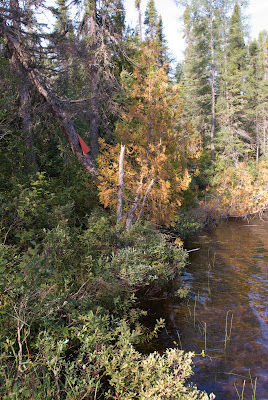 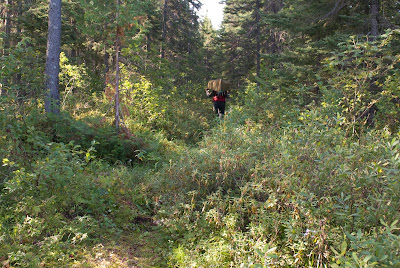 We paddled Quartz Lake to the portage to Vertente Bay of Attwood Lake. There was a boat cached there from Armstrong Outfitters. 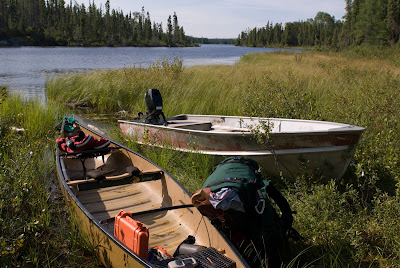 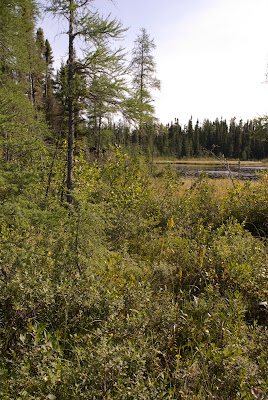 Instead of the portage we removed some sticks from the beaver dam and floated to Attwood Lake. It was more than 50 meters long. 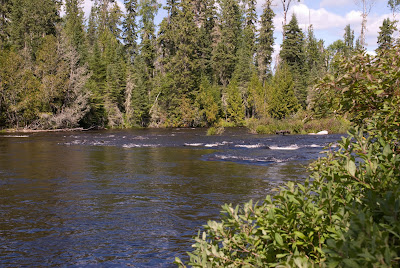 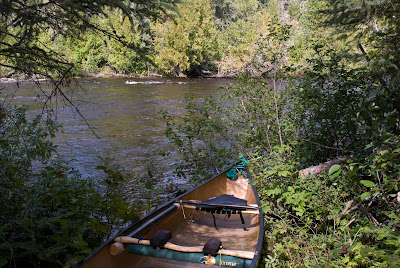 I walked the the shore line past the put-in to scout the rapids downstream to see if we could run them. I found an old portage trail, followed it up an incline where it disappeared in a tangled mess of trees. We weren’t going to portage this. 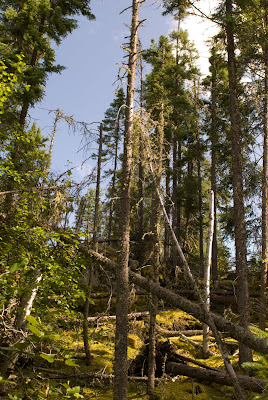 Now back at the canoe we needed to cut some brush to get the canoe in the water. We ran this first section of fast water and then eddied out. I stood up in the canoe looking downstream and determined we could run the rest. We went right down the middle without any problems.

Hurst Lake is large. The wind was blowing out of the NE. I took us on a course that would take us out of the brunt of the wind.

After putting up the tents, gathering wood for the fire, making coffee I repaired the third hole in my sleeping pad. 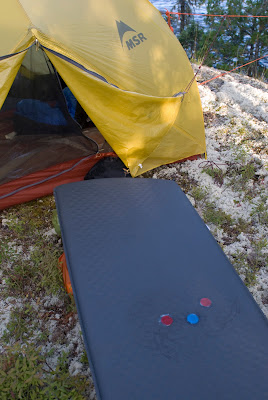 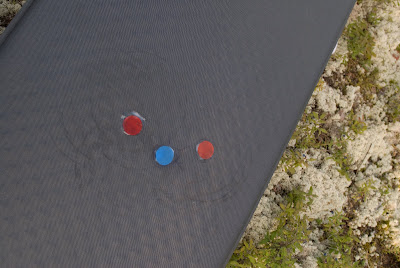 The wind eventually died down. Feels like it might get a little cool out tonight. This campsite looks like it has been used in the past. It appears it was some sort of camp many years ago. There were some very large nails that were pounded into some of the trees with some old spruce poles that looked like they were used for some framing. 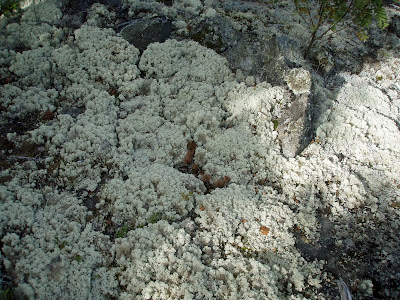 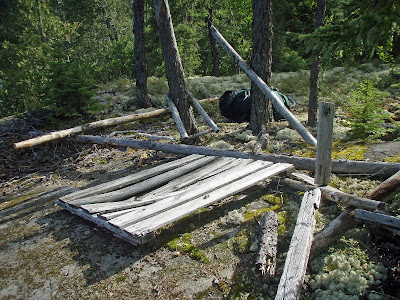 When we were on Hurst Lake we saw one guy fishing in a boat in front of an outpost camp that’s about 2 kilometers further north of us on the west shore in a small bay.

Another nice meal fixed up by Dave tonight. It was a soup of cheddar cheese, broccoli, corn and almonds. Dave made some more of his “hippie pancakes”. IThey were a apple and cinnamon flavor with some brown sugar on top. It hit the spot! 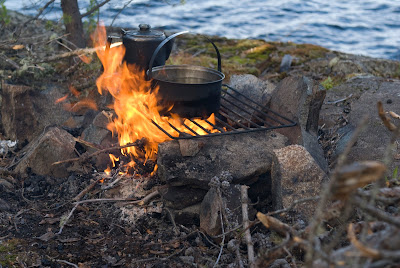 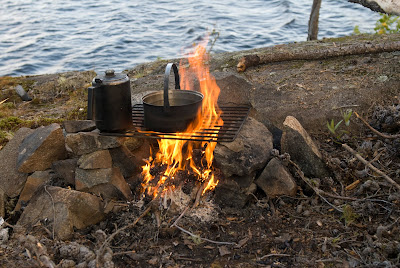 It’s getting darker earlier at night. It’s 09:12 pm and I’ve been in my tent for about ten minutes. Well, I’m tired. We did some walking today. Tomorrow we are on the Witchwood River. I hope it goes much more smoother than the Petawa Creek.We’ll be going upstream, again.