I tossed and turned most of the night between the lumps underneath the tent floor. I could hear the sound of rushing water. My tent was very wet inside since it rained yesterday morning before I was able to pack it away.

When it began to get light out I didn’t want to look at my watch to see what time it was, but I knew it was about time. Although I felt like getting up I would wait until I heard Dave moving about in his tent. I knew we weren’t going to have a fire this morning so I didn’t want to just stand around. My sleeping bag was my friend this morning.

Eventually I got out of the tent at 07:00 am when I noticed there were some parts of the tent that were frozen. Dave couldn’t get his maps out of his map case because they were frozen.

When I got up I put on dry clothes in an attempt to stay warm, Dave put on his wet stuff. 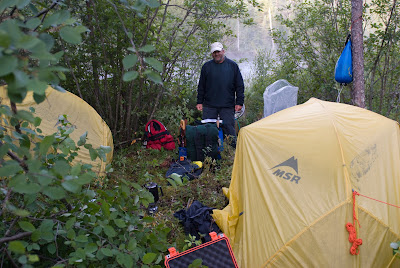 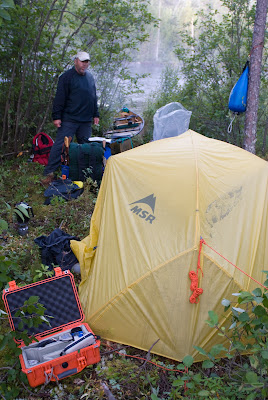 This morning we made coffee on the stove as well as the oatmeal. We stood around the stove watching our breathe while we spoke. 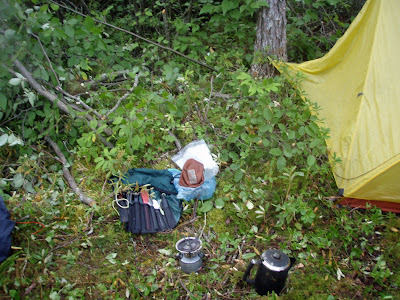 Finally I needed to put on my wet clothes and boots. It wasn’t as bad as I thought it was going to be, but it wasn’t good either.

It was 10:05 am and we were on the water. I really should say, in the water. Well, the water felt warmer than the air temperature. 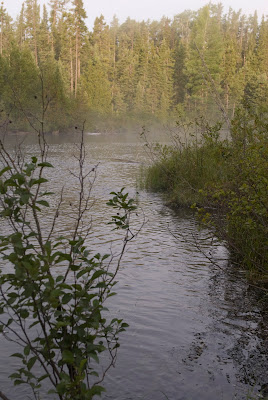 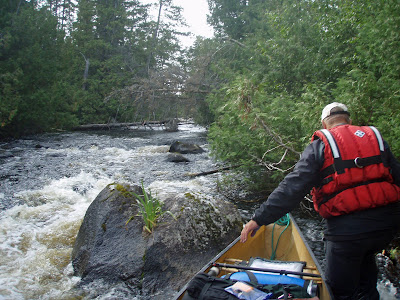 It took us one hour and five minutes for us to get to the portage to Auger Lake. Before we got there Dave had cut his thumb badly with the Corona pruning saw while cutting some sweepers. The blood was flowing while Dave continued to cut. He would then stop take a look at his thumb, then back to cutting. He really needed some stitches, but....

The sun has been trying to come out this morning through a thin layer of gray clouds. Eventually it made an appearance. Actually it ended up being a pleasant day.

The beginning of the creek before Auger Lake actually showed signs that the water level was dropping some, but it was still high.

We found a portage on river right as Dave and I had it marked. We had other information that it was on river left. We did check the right side first and found evidence of a trail, but there weren’t any blazes. 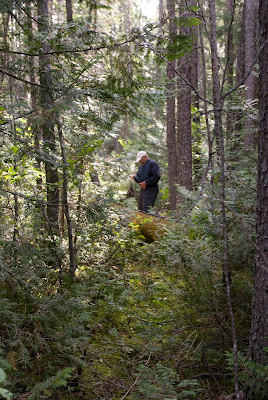 Dave found a trout lure at the beginning of the portage. (UTM # 42) It was still in the paper container. Dave thought it might have been dropped by a guy named Rick who travelled through this area in 2007. He abandon his trip when he got to Auger Lake. Rick was the last person we were aware of who went up the Petawa Creek. There were no recent signs of use on the Petawa Creek in the last two seasons. There wasn’t any recent saw work.

We cleared the trail, but like I said there weren’t any old blazes. We saw other evidence of some old saw cuts. I took some photos of the take-out. The put-in at / near Auger Lake was UTM # 43. This portage was 78 meters long. 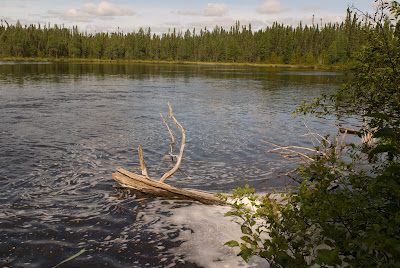 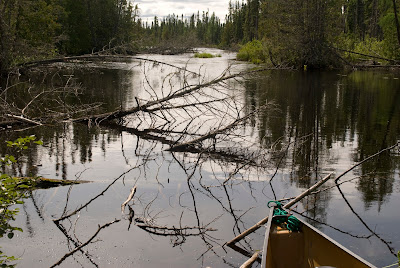 It took us 14 hours to get up the Petawa Creek. This creek is about 10 kilometers long. We walked hours in the water at a time while Dave cut sweepers, sometimes we would paddle only 10 to 20 meters in some areas where it was too deep to walk, we moved to each side of the creek depending what obstructions we saw ahead of us. This section took a tremendous amount of work to get up it. When Dave cut the sweepers he would use his saw in his right hand while holding the bow of the canoe with his left. Sometimes I had to stand clear of the larger trees that Dave cut as they tossed and turned while going downstream.

We decided to have lunch at a nice site, lots of rocks. (UTM #44). Dave told me there was enough room for a one four person tent. This site has been used as a shore lunch site as well. We ate lunch from 01:30 pm to 02:05 pm. It was sunny out for a while, but now the sun disappeared. Hopefully it will emerge again soon. 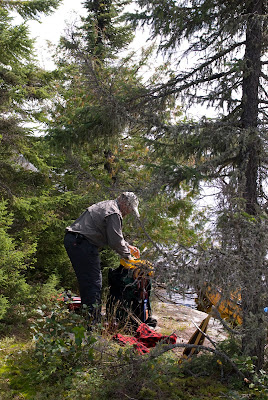 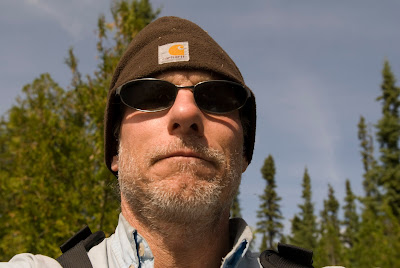 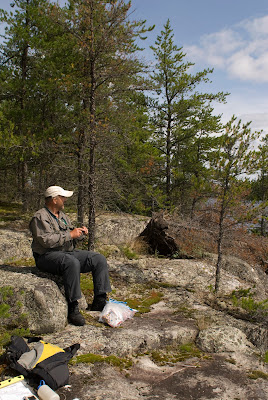 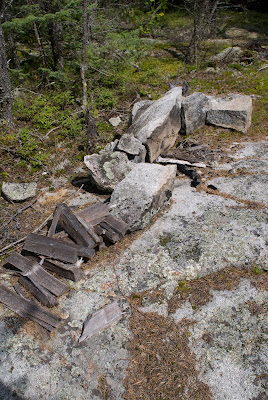 I don’t know what it is about people who think they need to put a pop can at the end of branches, but we found another one here.

I realized this morning that I didn’t have my tan baseball style cap. The more I’ve been thinking about it I think I lost it at the last portage before our bushwhacked campsite.

We continued past the outpost that’s in the lower third of the lake when we saw two more guys fishing in a boat near the dock.

We paddled a couple more kilometers out of sight of the outpost when we found an area to make camp. We pulled in at 03:11 pm. We stopped early today since it was nice out and there was some sun to dry our gear. Plus the fact it was a decent place to camp. It was a good day to do all of that. We both were able to get caught up documenting information on our maps. 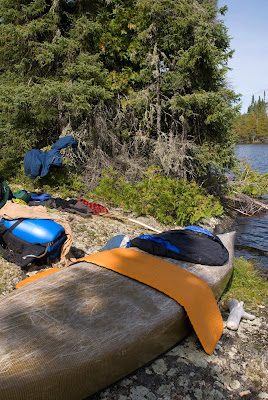 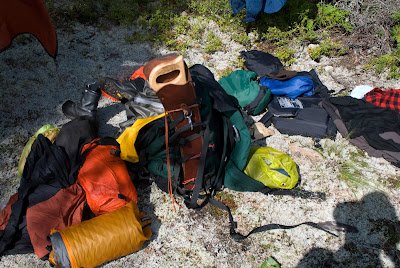 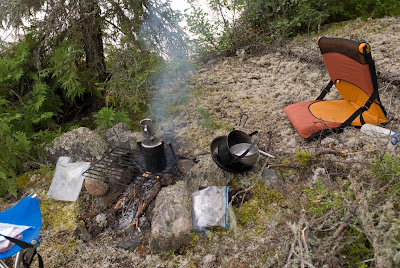 This site hasn’t had any activity of any one camped on it in a long time. The fire rocks have lichen on them. The area where I have my tent isn’t too level. I thought it was going to be nice and soft, but I found some metal cans underneath the moss. I found several cans that I removed from underneath the tent. Believe it or not I missed one that’s right under my butt. When I’m done writing I’ll have to work around it for sleeping.

For dinner Dave cooked up some summer sausage and tortellini. Then Dave cooked up one big blueberry muffin. We each had half. Well, it’s 09:16 pm and time for sleep. The bugs and mosquitos are back after last nights frost. 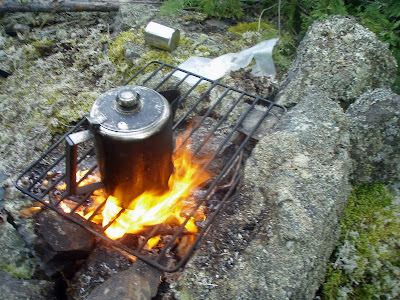