Once again I was up before my 6 am alarm waiting for it to go off. Once it went off I turned it off. About 10 minutes later I heard the seagulls making loud noises while they were flying around the parking lot. I eventually got out of bed at 06:36 am. I wasn’t in a big hurry.

There was a coffee machine in the room so I made a small pot, but it looked awfully weak. Luckily, I still had some coffee in my thermos so I poured a cup from it.

Listening to the news this morning they were saying there were some large storms to the west last night. There was a chance of more severe storms in the area today and to the north of here.

I took a shower before checking out. There was a different lady behind the counter. She asked how my night was. I told her about the fireworks and that they kept me up awhile. She told me she asked the night person if anything happened over night and she wasn’t told about any fireworks. I told her they were coming from this area of the building.

There’s another Tim Horton’s up the road from the motel where we stopped last year prior to heading to Armstrong. I decided to stop and have my thermos filled with coffee. Next, I wanted to stop at a gas station before leaving Thunder Bay. I wanted to fill up my tank so I didn’t need to buy any gas in Armstrong. It’s about 150 miles between Thunder Bay and Armstrong without any gas stations or anything else as far as that goes. So that’s a 300 mile round trip.

The temperature was 67 degrees with a fog over the city. It appeared there had been a lot of rain last night with all the water standing on the road.

Finally, I pulled into the parking lot at Mattice Lake Outfitter’s at 11:20 am. It was 149 miles from the gas station where I stopped in the northern part of Thunder Bay to Mattice Lake.

There were some other vehicles in the parking lot where I parked. I saw Dave standing on the dock with some other people who were casting a line in the water. As soon as I got down there a young boy caught a walleye. 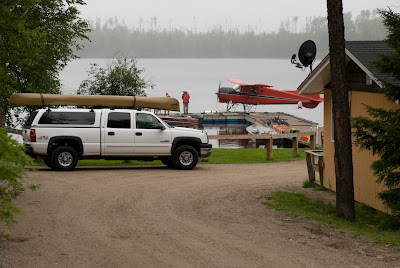 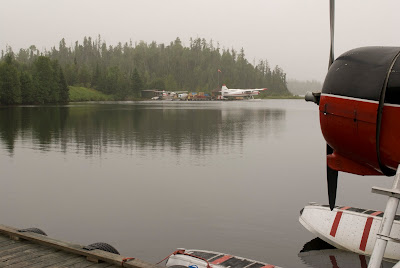 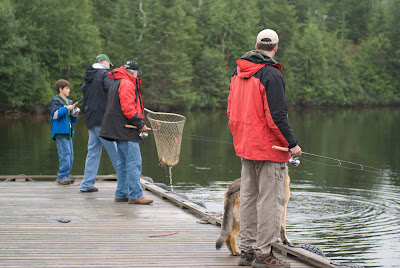 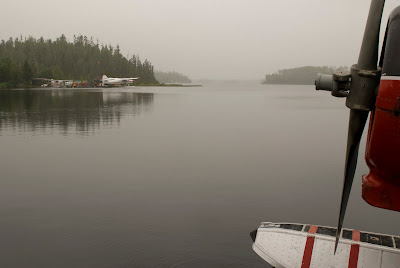 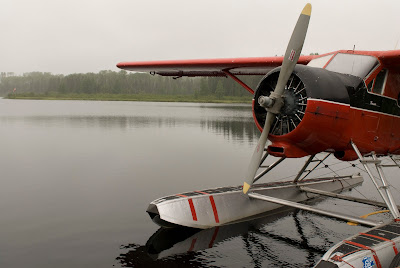 Dave and I exchanged our hellos before heading up to the office to see Yolanda. The weather wasn’t cooperating. The guys with the kid on the dock were supposed to fly to Whitewater Lake today, but with the strong NE wind there were 4 foot rollers coming over the dock at the outpost. No one was flying. 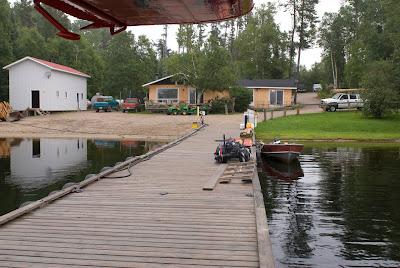 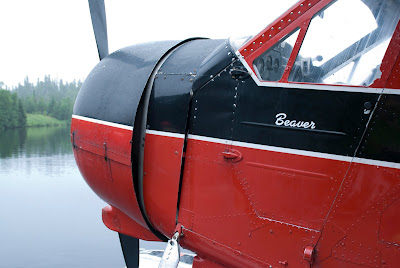 Yolanda told us everything was backed up. She suggested we go to lunch and come back later.

Dave and I went to E & J’s Cafe in Armstrong. There were a lot of people inside. Dave commented that this was the most people he has ever seen in the cafe. It must be because everyone else is grounded.

I only had a hamburger and fries.

We drove back to Mattice Lake Outfitter’s and spoke to Yolanda. She gave us our game plan, since they couldn’t fly any of their guest to any of their outpost.

Since the cabin that we were going to stay in tonight was still being used by the group that was down on the dock earlier and their other cabin was rented to a group of five that Mattice Lake Outfitter’s was going to set us up at Wildwater’s B & B.

We stayed at Wildwater’s last year and Dave spent last night there. Yolanda told us we couldn’t check in at Wildwater’s until 5 pm, so we could use their larger cabin to sort our gear until then.

Yolanda also told us that she was moving to Thunder Bay. She was leaving in a half hour. We both didn’t believe her when she said it, but she said she was leaving the business and she’s going to do some social work in Thunder Bay. She said her husband already had a job as a firefighter. This was unsuspected for us. I shook her hand and wished her good luck. Many of you know Yolanda and know how much of an integral part of the family business she was.

Dave and I headed to the cabin to sort our gear. My pack was pretty much ready to go, but I took some stuff out because it was way too heavy at 67 pounds. 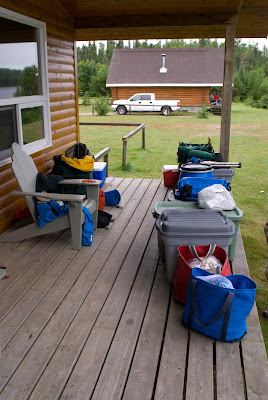 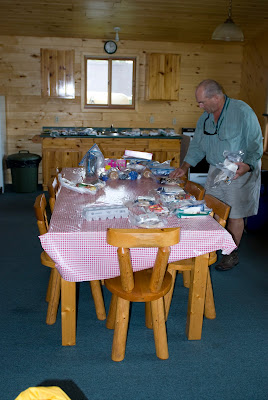 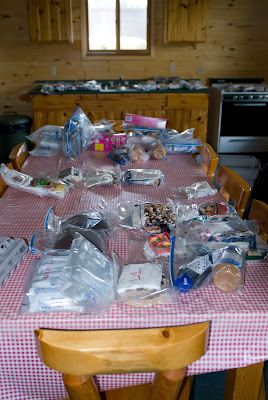 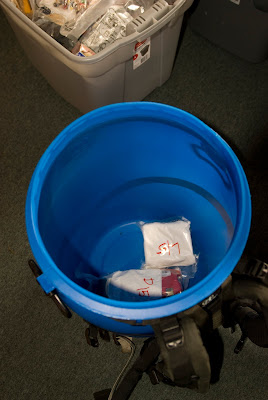 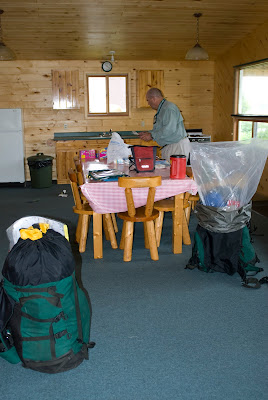 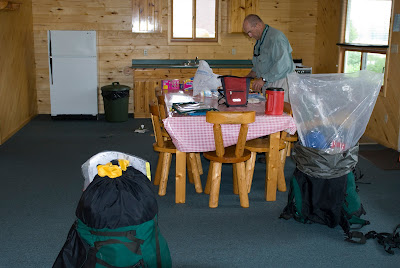 There was a lady who was cleaning the cabin when we got there. She mentioned that she wasn’t aware that Yolanda was leaving until today, either.

Dave and I sorted through our 21 days worth of food. The original plan was to take one food pack and to put the remainder of the food in each of our personal packs. After throwing another 15 pounds in my pack I knew I didn’t want to take a chance in carrying it. That’s the reason I brought along my Granite Gear Quetico pack. Now with the extra bag I took some additional items such the stove, fuel and some smaller items from my other pack and placed them in this pack. My personal pack was now down to 57 pounds while the other ones were around 55 pounds.

We are using a 60 liter blue barrel as one of our food packs. I’ve never travel with a barrel before.

It was now a quarter to five and we were done sorting our gear. We walked back up to the office and spoke with Don Elliott. He showed us the weather radar on his computer. It showed a large storm over us and it extended all the way to Iowa. 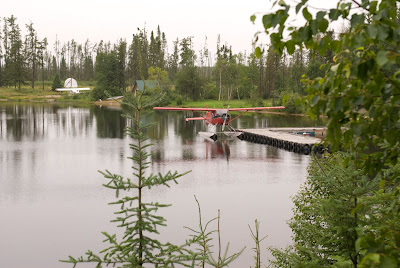 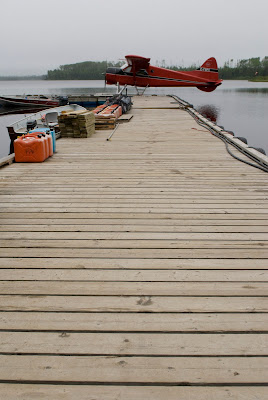 Earlier he told us to check in around noon tomorrow, but now he changed it to 9 am. Henry, one of Don’s pilots, said last Saturday’s groups were finally flown in to their outpost destinations on Monday.

We drove over to Wildwater’s B & B and spoke to Bert and Brenda. We checked in and got our room. 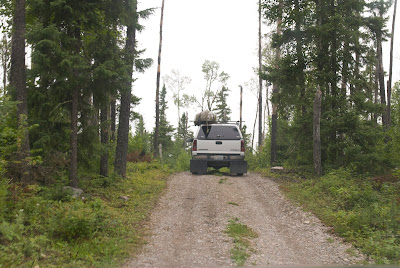 Before heading to E & J’s for dinner we went over some other trip reports that covered some of our route.

E & J’s had a few people inside when we arrived, but it quickly filled up. We had the Roast Pork special with mash potatoes, gravy and vegetables. I also had the soup and the dessert.

While back at Wildwater’s a group of four came inside. They were planning to paddle the Kopka River. With all the flights backed up they decided to get a shuttle from Bert and put in at a different spot. Dave planted the seed of paddling the Winisk River. He said we could access it from the Pickle Lake Road.

Dave was looking at some of the canoeing books on a cart in the main room while I finish up writing for the night. Time 09:31 pm.